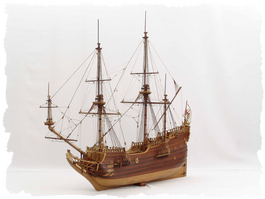 The fluyts are different to ships used in Europe in the seventeenth century not only for their round shape with a lowered quarter deck but also for their pronounced round shaped-hull. Their dimensions were long and hulls of a very narrow cross-section compared to other square-sailed vessels.
They were first produced in 1595 with square sails on their foremast and main mast and a lateen spanker on the mizzenmast. These vessels were fast but requiring only a small crew to operate them and had the advantage of being cheap to build
Pieter J. Lioorne-Hoorn (Holland) is credited with their design with the first feluccas built in Lubecca, Germany in 1618. The last one was built around 1780. The ‘Friede’ fluyt, as an example was built in Berlin in the dockyards of Berlin in 1682 – its length was 32 metres.
‘Derfflinger’ had two decks. Towards the bow was located the galley and areas for the storage of munitions, food and water. Below these areas was the stone ballast. Towards the stern, there were medium-size cannons and the compass. The forecastle generally contained four cannons, as did the stern area and quarter deck.
By the end of the 17th century the fluyt Derfflinger belonged to the fleet of the Dutch-based Kurfuerstentum Brandenburg. In the "triangle trade" of that time she transported rum and other stuff to Africa, to buy slaves, who were then exchanged in the West Indies for sugar, which was then brought to Europe. Later she and other Brandenburg ships were used in the War of the Spanish Succession. Fluyt Derfflinger was built in 1675 for the Elector of Germany Friedrich Wilhelm. The ship was named in honour of cavalry general Georg von Derfflinger, who 1675 won a Brandenburg victory in the battle of Fehrbellin against the Swedish. He is depicted on the stern of the ship wearing black breast plate armour, a navy uniform lined with red and leather trousers, a red scarf and a black hat containing red and white feathers. The background was blue and the whole picture was surrounded by deep red cloth and fringed with gold. The flag at the stern shows the Kurbrandenburg red eagle with hat, scepter, sword and breast shield.
Prior to 1684, ‘Derfflinger’ was named ‘Wolkensaule’. It was purchased in Danzica in January 1681 by Benjamin Raule and was used during the war against Spain (May 1681) declared by Prince William Frederick. It was 110 feet long and 23 feet wide; it was armed with 3 – 16 cannons and crewed by about twenty men. From 1686 – 1693 the fluyt sailed the Western Africa and India routes. The ‘Friedrich Wilhelm Zu Pferde’ had been its escort as well as the ‘Hoffnung’ during the trips up the Western Africa coast and up to the Shetland Islands.

The following photos are an example of how a finished model of the Derfflinger can look.